Debating and critical oracy in History

Earlier this term, PiXL invited me to run a breakout session at their History Conference. It was a terrific opportunity to think about the unique role that debate plays in the history classroom.

Debating and history are a superb match. History teachers and their students are in the business of analysis and evaluation. Essays and extended questions which ask “To what extent…?” “How significant…?” or “Do you agree?” are all calling for for more than one perspective to be examined and a case to be put forward supported by evidence. It’s not enough to relay the facts, the students have to explain why certain factors were key or why individuals played an important role. Historical debates could include:

History teachers might also want to use a “Time set debate”. This is where the students have to debate as if they in a particular time – excellent for getting rid of the the 21st century goggles and building empathy. I still vividly remember speaking on the opposition of the motion “This house would give women the vote” in a debate set in 1910, when I was studying sixth form history.

For variety, teachers might also want to include a Mock Trial during the year. Which of history’s baddies would you like to see in the dock? Or are there more ambiguous characters who need to be interrogated? For a mock trial you need to assign everyone a role (defendant, lawyers, witnesses, court staff, judge and jury) so it’s great for differentiation and it’s an engaging series of lessons that your students won’t forget (especially if you allow them to dress up..!)

A balloon debate can also be an effective tool in history. This is most often used with characters and it could be a fun end of term lesson to allow students to pick historical figures and argue which one should be allowed to stay in the sinking hot air balloon and which ones should be chucked over (therefore disappearing from history). But they can also have more of a curriculum focus and can be especially effective in revision lessons. Looking at the causes of World War Two? Let six groups prepare one cause each and then have spokesperson argue why their reason is more significant and should therefore stay in the balloon.

A final idea is hot seating. A favourite in the English Literature classroom, it is equally useful to the student of history. In this activity pupils take on roles from history and are quizzed in this role. It’s a super way to build that historical perspective and consider a range of views. It can be done as one-off lesson, dropped in as a quick activity when the need arises or be an ongoing part of your classroom. Once again I remember my own history A level (and must give credit to the wonderful Dr Chapman that I do) and my experience of being David Lloyd George throughout year 12. Whenever it was relevant in the curriculum, I would have to speak as him and my classmates all had their own  alter egos… 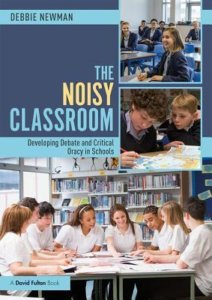 There are even more ideas for incorporating oracy into the classroom in the new book “The Noisy Classroom: Developing Debate and Critical Oracy in Schools”

Let us know how you use oracy in the history classroom by emailing debbie@noisyclassroom.com